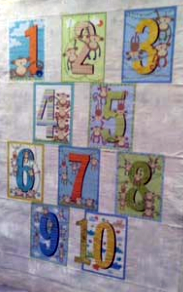 Panels are great for a quick and easy quilt but look at them carefully before you buy. A friend gave me a Numbers panel which she assumed was numbers 1 to 10 but in reality the blocks were numbered 0 to 9. When I noticed this I had to make a number 1 to put in front of the “0”. In our culture we usually learn our numbers starting with “1”. I think the maker of this particular panel also knew this because there are 9 birds and 9 clouds in the block “0”. I think I have covered up the 10th of each so I will get out my trusty fabric pen and draw the 10th bird and cloud into the block.

Another Numbers panel I bought had two printed words under each number. I did have numbers 1 through 10 but the words printed under the numbers were written in French and Spanish. Once again my trusty fabric pen came in handy as I wrote English words for all of the numbers.

Alphabet quilt panels should be looked at carefully also. Last year I had to add the last three letters of the alphabet to a panel. Be careful out there!

Members: Do you have a favourite quilty video, technique, trick, tip, or something else you'd like to share? Send it in to the Newsletter Editor, and it will show up in the next newsletter, as well as here.