Gaye McCance had been a long time member of Lions Gate Quilters Guild when she took a fall in August 2013 and fractured her neck. She was taken to Vancouver General Hospital where she was treated for her injuries and other health issues. She has regained some movement in her hands and legs, but progress has not been as fast as she would have liked. Not long after she went into the hospital,several members of the guild and other friends made quilt blocks which resulted in two lovely quilts being made for her. She was presented with these quilts on her birthday in March by three of her friends. She has just recently been moved to the 4th floor at the Lions Gate Hospital. We all wish Gaye continued improvement and her lack of presence is noticed in several groups. 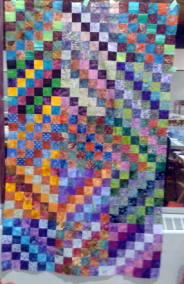 Every Quilt Has a Story

Members: Do have a story you want to share about one or more of your quilts? We'd love to hear it.

Send it along to our Newsletter Editor. You'll be contacted for photos to include.